Tara is a Windows program (working on Windows 95 and later versions) designed for horary astrology according to the experience of Maurice McCann (1938-2011). It calculates all the special rules like refranation, frustration, prohibition, translation, collection, en indicates them in the horoscope wheel and aspect grids. This frees the astrologer from many hours of tedious work. A graphic ephemeris shows the evolution of longitude aspects (normal and antiscia) and declination aspects. A search function to find exact aspect moments and ingresses is also included. The help file contains numerous examples of interpreting question horoscopes. Data are saved in Paradox compatible tables.

Or, you can pay by credit card or PayPal:

The installation file be sent as soon as possible to your e-mailaddress using WeTransfer. You can also come and get it at our place in Ghent, Belgium (or sometimes in Novi Sad, Serbia) and pay cash, after a phone call/e-mail. 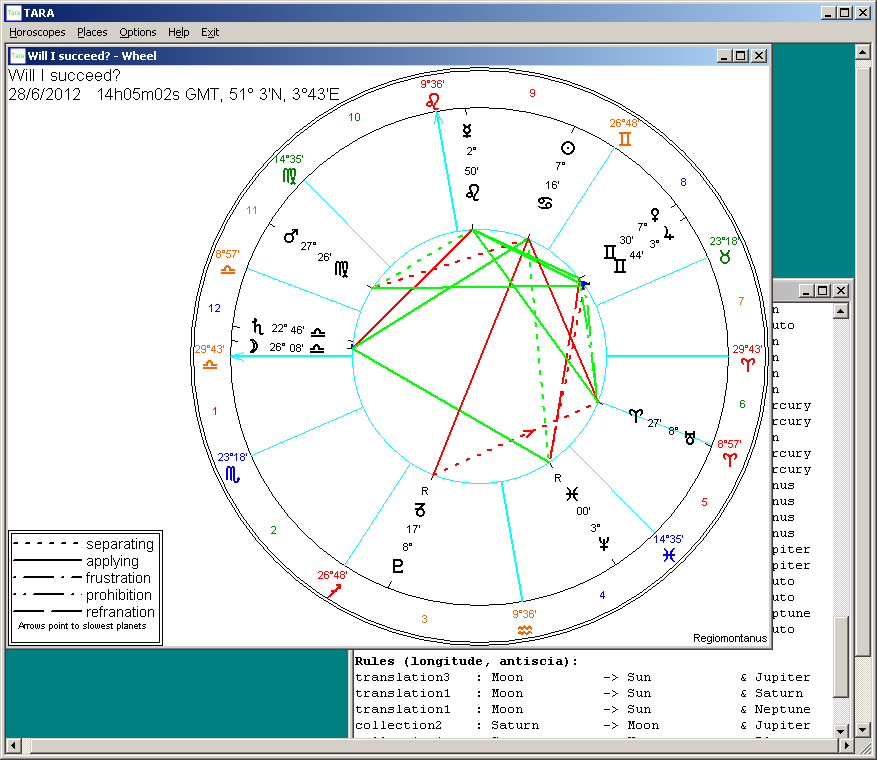 House systems: A selection of house systems is available, among which are Regiomontanus, Campanus, Vehlow, Equal, Koch and Placidus.

Something about horary astrology, by Maurice McCann:

Horary Astrology uses planetary aspects to find the answer to a question that has been posed by a querent. The question is voiced and the time is noted. A horoscope is constructed which represents the question and then used to identify aspects between planets which themselves will indicate the answer to the question. There are basic rules that are employed when the chart is viewed and these rules do not involve “interpretation” in many cases where the answer relies on a simple “yes” or “no”. They are scientifically applied to the chart with little “esoteric” astrological knowledge.

In the majority of cases, “yes” answers are a result of:

“No” answers are usually caused by the fact that there are:

It becomes clear that Horary Astrology, with its defined rules, is a suitable starting point for those who wish to de-mystify astrology as a whole. All that is needed to incorporate Horary Astrology into your life is a basic knowledge of planetary aspects and the required set of rules.

The Rules of Perfection:

The Rules of Imperfection: